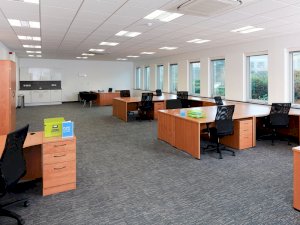 At that time we were only interested in the financial side of the question and didn’t pay much attention to the fact that the premises were located on the underground floor. Just a few days later we noticed that we couldn’t make phone calls from the office and the internet connection there was unbearably slow. The reason for these inconveniences was Vodafone signal problems. At that point we clearly understood that we had to do something to change the situation and to improve Vodafone poor coverage in the office. On the internet we found information about Vodafone booster box and we decided to buy one.

We chose Nikrans NS500-GSM+4G PRO booster. The Vodafone booster box has an indoor coverage of about 500 m2 which is enough for our office. It supports 800 and 2600 MHz frequencies for 4G Internet and 900 MHz for calls, so it is fully compatible with Vodafone mobile operator. Immediately after the installation we felt the difference. Vodafone signal issues disappeared and we started to enjoy perfect mobile reception, our internet connection became much better. We are fully satisfied with the result and we will advise GSM 4G signal boosters to people looking for ways of improving Vodafone poor reception.

The best marine amplifier for those who love cruising!

I would like to thank MyAmplifiers customer care for all the support that they have provided me during our journey. In fact, this team will forever be in my heart, because thanks to them my dream became a reality. A lot of us think from time to time that they would like to quit everything, buy a boat and go cruising somewhere in the open sea.

Solution for a large domestic house with no Tesco Mobile signal

I purchased the LCD-500GD to cover a large domestic house that had extremely poor Tesco Mobile cell signal.

I have solved my Eir mobile signal problems with LCD1200-4G-D!

When I ordered this mobile signal booster, I had practically no expectations at all. I was desperate and absolutely disappointed that I had Eir 4G poor coverage in my neighborhood. And I decided just to try. I really couldn’t even expect that just one booster box with two antennas would make any difference. But the difference is so significant.

If you sail a lot and need good Internet for boats, visit Myamplifiers.

Owning a boat is actually no big deal in my country, especially since I live near the sea, so me and my family has also bought one for ourselves recently. We were testing it out and going on some trips, and one of the things that we noticed almost immediately was poor coverage of GSM signal and marine internet. We thought that it was normal and a very common flaw of using boats and getting far from the shore.